Giving back for Swansea Jack!

81 years after his death, the dog who saved 27 lives raises funds for local animal charity 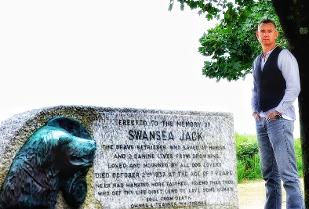 In June, local storyteller Carl Gough shared a Tweet about the dog known as Swansea Jack who saved 27 lives in the 1930’s in and around Swansea; to this day Jack remains the only dog to ever be awarded two bronze medals – the canine equivalent of the Victoria Cross.

The initial tweet gained a good response and made Carl realise he didn’t know the finer details of the story.

As a storyteller he thought he should find out more but when he began searching online he was frustrated to find every webpage contained the same paragraph, word for word in most cases. Next he began making enquiries through social media and among friends and colleagues and the answers he got made it clear, the memory of Swansea Jack was fading!

“Many people didn’t seem to know about the existence of the dog called Swansea Jack and among those that did, hardly anyone knew much beyond him being a dog that rescued people.”

Carl found the book about Swansea Jack written by Mare Stickler Davies in Swansea library and combined with his own research he discovered a powerful story he felt compelled to tell. “Stories are how we remember our history and when people stop telling the stories we risk losing our history,” Carl said.

As Carl began to craft and mould the information into a storytelling performance, he also worked to raise awareness about Swansea Jack through a dedicated Facebook page. He also created a video on YouTube to reveal the key locations of the story. When he was alive, Swansea Jack raised huge amounts of money for local charities and so Carl decided that the performance should be a fundraiser for local animal charities. The Pettifor Trust raises funds for several local animal charities and so Carl approached them to see if they would like to be involved. Marianne Pettifor, Chair of the Trust said, “to us, Swansea Jack represents all the brave and loyal homeless dogs we help on a daily basis and for this reason we wanted to be involved. It will be wonderful to hear Carl bring Swansea Jack back to life by reminding us of the amazing story of this brave and loyal dog.”

Finding a venue was the next challenge. The venue needed to be accessible and affordable and able to provide a relaxed and informal space along with refreshments for an evening of entertainment. It was soon clear that the cost of venue hire was going to make it difficult to raise any meaningful funds for the Pettifor Trust, but then contact was made with Swansea YMCA and everything fell into place. Stacey Brown, Arts officers at the YMCA said, "YMCA Swansea are thrilled to be the host venue for Swansea Jack – the evolution of a hero. It is important to celebrate and remember local history."

Everything is now in place and everyone is looking forward to the maiden performance of Swansea Jack – the evolution of a hero which will take place on:

Entry is free although donations will be welcomed. Tickets should be reserved in advance via Carl’s website to ensure you aren’t disappointed.